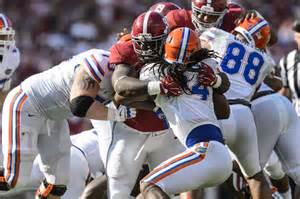 Saturday will be Florida’s first appearance in the SEC Championship since their 2009 lost to Alabama, while Alabama will be playing for its fourth SEC title under Saban.

The Gators come in looking as vulnerable as a 10-2 SEC team can look. The Gators defense has been the team’s strength this season, while the Florida offense has been on a steady downward spiral since the suspension of quarterback Will Grier. In three of the last four games, the Gators offense has been atrocious. The last four games for Florida include a 9-7 win over Vanderbilt, an overtime win over Florida Atlantic-which just finished the season at 3-9, and 27-2 loss to arch-rival Florida State.

Unlike the Gators, the Crimson Tide are rolling.  The Tide are playing for a birth in the college football playoff for the second consecutive year of its existence, and for a chance to win their fourth national title under Nick Saban.

Anything can happen on any given Saturday, but I can’t get how bad the Gators looked in wins over Vanderbilt and Florida Atlantic out of my mind.

Taking the points and Alabama -17,

We are 1-0 in the NFL this week after picking the Carolina Panthers against the spread over the Dallas Cowboys on Thanksgiving.

There’s some tough match-ups this week, but here is my favorite two team teaser for Sunday November 29.

I love this Arizona team. I can see this game getting ugly, but 10.5 is a huge number for road team.  At 3.5 there is no reason the Cardinals should not cover easy.

The Buccaneers  are starting to find themselves. The defense has been playing well lately, and offensively, I see Tampa’s balanced attack moving the ball consistently on the Colts all game.

The Colts are already a little banged up with injuries and 0-5 as a favorite against the spread this season.  I like the Buccaneers a lot in this match-up, and at +10, I absolutely love them.

For my other NFL plays

The Eastern Michigan Eagles 1-10, are one of the worst football programs in the FCS. You would gave a hard time arguing that any program is worst. The Eagles have only finished .500 once since 1996, with their last winning season coming in 1995 during the Charlie Batch era.

Central Michigan comes in at a very solid 6-5. The Chippewas, has three loses to nationally ranked teams Oklahoma State, Michigan State and Toledo, to go along with close defeats to Syracuse and Western Michigan.

Central Michigan leads the Mid-American Conference in total defense, so don’t expect too many points from Eastern Michigan.  On offense, Central Michigan will hope to air the ball out with a passing attack that ranks second in the conference.

The only chance I see that the Eagles keep this game close is due to rain in the forecast tomorrow, however the rain is expected to clear up around kick off time.  If this turns into a ground game, one side will be asked to perform out of character. Central Michigan has the worst rushing attack in the MAC by far, averaging only 94 yards on the ground a game.  Unfortunately for the Eagles, their defense may not be strong enough to capitalize on the Chippewas deficiencies running the ball.  If the Chippewas are forced to run, they will be doing so against an Eastern Michigan defense that is allowing 324 rushing yards a game, which is dead last in the nation.

Eastern Michigan does rank number one in the conference for passing defense, however this shows where stats can be deceiving.  When you combine the Eagles inability to stop the run with the fact that they usually lose big, there isn’t much need for opponents to put the ball in the air.

A big point spread and potential rain are the only things keeping this from being a lock.  Despite the records, I expect Central Michigan to be motivated for their rival at home. I’m going in on Central Michigan -24. 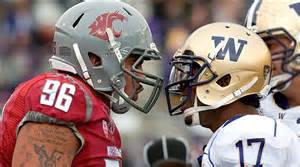 The Apple Cup will be a battle between the Washington defense and Washington State offense.  Washington needs the win here to become bowl eligible, but this is a rivalry game, so motivation shouldn’t be an issue for either side.

Despite the fact that Washington State’s passing attack plays into the strength of Washington’s defense, I see the Cougars winning this game. Based on all spreads currently having Washington as at least a touchdown favorite, it’s even more reason to love the Washington State Cougars +8.

This match-up features two of three the youngest head coaches in the FBS, P.J. Fleck, of Western Michigan, 34 and Matt Campbell of Toledo, 35. The future is bright for Campbell and Fleck, currently both are being rumored as a candidate for some soon to be open power five conference head coaching jobs. Ironically both coaches also share the same birth day of November 29th, one will have a happier birthday than the other.

Toledo has a lot at stake in this game, and I’d assume most fans of mid-majors outside of Kalamazoo or DeKalb, are probably pulling for the Rockets.  A Toledo victory would keep hopes of a New Years Day bowl alive, as the Rockets are currently ranked 24th in the College Football Playoff rankings. A Toledo win also means a rematch in the MAC Championship game and second chance for arch rival Bowling Green, who the Rockets defeated 44-28 on November 17. A Toledo loss would send the Northern Illinois Huskies to their sixth consecutive MAC Championship game.

Western Michigan is very capable of ruining what has been a great season thus far for Toledo and Matt Campbell.  Two weeks ago the Broncos were rolling at 5-0 in the MAC before back-to back losses to Bowling Green and Northern Illinois. At 6-5, the Broncos will be looking to get the losing taste out of their mouths and improve their bowl position. Western Michigan also lost to Ohio State and Michigan State earlier this season. In this series, the Broncos have dropped five straight contest to the Rockets including 20-19 in overtime last season.

Both teams, run the ball well, but Toledo does a much better job of stopping the run.  The Rockets rank 13th in the nation is rushing yards allowed a game, while the Broncos rank 96th.  Not being able to stop the run played a big role in Western Michigan’s loses to both Northern Illinois and Bowling Green.  Toledo’s rushing attack is ranked number one in the Mid-American Conference. In what could be a chilly and wet Friday afternoon at the Glass Bowl, I see Toledo wearing Western Michigan down late in the second half, with standout running back Kareem Hunt leading the way.

Do not count Western Michigan out by any stretch of the imagination, but as long as Toledo protects the football, I think a rematch with Bowling Green is on the horizon.

The spread is Toledo -8, I think the Rockets cover, but as for me personally I am not going in at those odds. I’m going with Toledo at the Money line or in an adjusted spread. I like the Rockets, but I like them better at -6.5.

Tulsa at Tulane definitely may not seem like one of the sexier match-ups of rivalry week, but if you want to win some money you should be paying attention.  At 5-6, Tulsa needs this game to become bowl eligible in Philip Montgomery’s first season as head coach.

Tulsa is a good offensive football team, averaging 35 points a game, including putting 38 points on the Oklahoma Sooners earlier this season. Tulsa has play makers on offense, led by wide receiver Keyarris Garret.

But as good as the Tulsa Golden Hurricane offense has been this season, the defense has been terrible (ranked 124th in nation for yards allowed per game), which is why Tulsa comes in with a losing record.

Despite the defensive deficiencies of Tulsa, Tulane’s defense isn’t much better and the Green Wave lack the Golden Hurricane’s firepower on the offensive side of the ball.  Tulane ranks 115th in the nation with 18 points scored a game, and in order to beat Tulsa, Tulane will need to put a lot of points on the board.

Tulane will have a hard time stopping Tulsa, who is playing for a bowl berth and is overall a better team. Much better than the six points that Vegas is currently giving Tulane. Last week SMU a 1-9 three point favorite rolled over Tulane by 28.  This game is senior day for Tulane in New Orleans, but it won’t matter.

Tulsa -6 rolls to victory and into a bowl game. 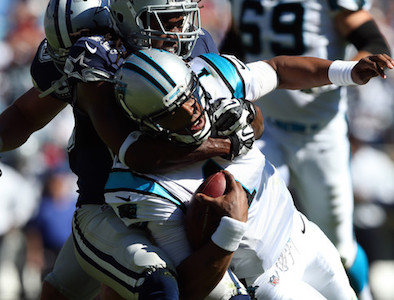 Dallas is America’s team, Romo is back and every game is a must win for the Cowboys. It’s Thanksgiving Day in the Jerry Dome, and the Panthers have to lose at some point,  so this looks like the perfect time for a Carolina loss right?

Carolina comes in with one of the leagues best defenses. Currently the Panthers are 8th in rushing and 7th in passing yards allowed respectively.  The Panthers also lead the NFL in turnover differential with 25 take-aways, while the Cowboys have a league worst 7 take-aways and rank 31st in turnover differential.  I understand Romo is back, but Cam Newton is playing at a MVP level. Carolina is also playing with a chip on their shoulders and will not take Dallas lightly.

This is a must win game for Dallas and not Carolina, however, with all of America watching I see the Panthers sustaining their excellent level of play and sending a message to the world.  The Panthers are for real.

I expect a great game, but I’m rolling with the Panthers EVEN

The Browns are 3-6-1 against the spread this season. The Ravens are 1-7-2. The bottom line, right now neither of these teams are very good, and both are in contention for the number one pick in the 2016 NFL draft.

In week 5, as a 6.5 point underdog the Browns defeated the Ravens 33-30. The victory came behind a 457 yard franchise record passing performance by quarterback, Josh McCown.

There’s not much appealing about this match-up other then **Johnny Manziel** getting the start, who may or may not have been partying this weekend in Austin, Texas.

I’m not a believer in Johnny Manziel long term, and my motto for NFL betting the last few years has been “Don’t Bet on Browns,” which I also used as the name for a fantasy team.

For the franchise going forward it is probably best for the Browns to lose and end up with the number one pick and move on from **Johnny Manziel, but this game is it for the Browns. If either **Johnny Manziel or Mike Pettine have any chance of being back next year they have to win this game. If the Browns can not win this against the Ravens and Matt Schaub then I see 3-13 as the best case scenario.

At 3-7, the Ravens have not quit, but without Joe Flacco and Justin Forsett playing, I actually see the Browns winning this game. In the end, Mike Pettine will still be fired at the end of the season and Johnny Manziel is not the answer, but for one night the Browns will win on Monday Night Football and hurt their chances for the number one pick.

I may never say this again this season, but I’m actually betting on the Browns -2.5

We now know that Johnny Manziel will not be starting, and the spread has moved from 2.5 to 3.  I originally predicted a Browns 20-16 victory and actually like the Browns even more in this game with Josh McCown starting.  With Manziel inactive,  this game just lost any sex appeal that it may have had, but I’m still betting Browns (I already did at 2.5).