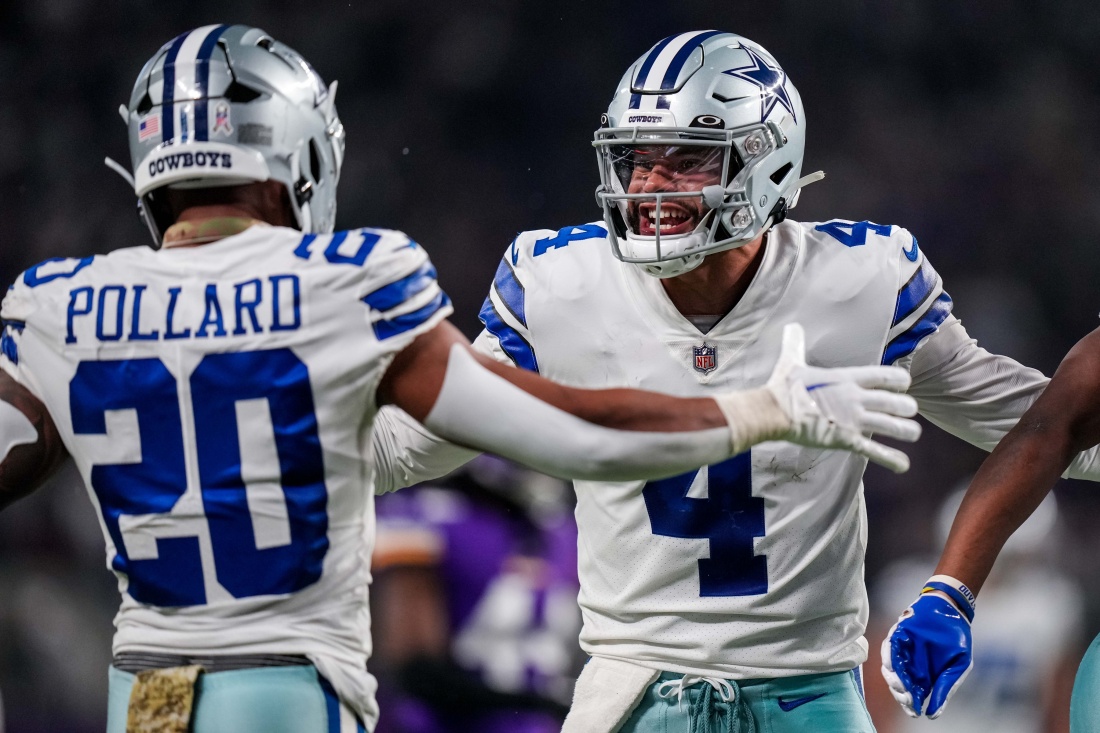 The Lions will host the Bills in the opening Thanksgiving game at 12:30 pm EST. The Bills were a 10-point favorite as of Tuesday night, and the total was set at 54 points.
The Bills are the betting favorite to win the Super Bowl this season, but the Lions have won three straight games outright as an underdog. Both teams are also cooking offensively, ranking in the top 11 in total offense, passing, rushing, and scoring.
While I believe the Bills will get more stops than the Lions, 10 points is a lot to lay against a surging team on their home turf. My favorite play for this game is over 54.

America’s team will host the Giants during the heart of the day. The Cowboys are a 9.5-point favorite, with the total set at 45.5. Although the spread is large, the Cowboys did beat the Giants earlier this season on the road by seven without Dak Prescot. The Giants also have a long list of injuries that continue to pile up since Sunday’s loss to Detroit. One thing about the Cowboys is when they win, they have won big lately, with their last five wins coming by 12 points or more. I’d either lay the 9.5 on the Boys for this game or pass. But I can’t trust New York in this spot.

For the NFL nightcap, we have the Minnesota Vikings, who are coming off an embarrassing 40-3 home loss, hosting the New England Patriots, who are on a three-game winning streak and have won five of their last six games. With the Vikings sitting as a 2.5-point favorite and the total set at 42.5, this is expected to be the closest game on the turkey day slate.

On the college side, there’s the Egg Bowl between the Ole Miss Rebels and the Mississippi State Bulldogs. Ole Miss is a two-point home favorite, and the total is set at 59. The Rebels beat the Bulldogs as a 2.5-point road underdog last season.
A big story around this game involves rumors that Lane Kiffin is in talks with Auburn to become their next head coach. Will the rumors have any effect on the Ole Miss players? Soon we shall see.
Let me know which Thanksgiving game you are most excited to watch and what is your favorite personal bet for the day.

Heading into May 3rd, only five of the 30 teams in Major League Baseball have had more than half of their games go OVER the total in the 2022 season. With this low trend of OVERS, more than 57% of the games played so far have gone UNDER the total.

Here are the main reasons I believe we have seen so many UNDERS so far.

1) Humidors
I’m not a physics expert, so if you are looking for an in-depth tutorial on how humidors work, I suggest doing additional research on Google after reading this article. What I can tell you is that all 30 teams have humidors in their home stadium this season, as opposed to 2021, when only nine teams used humidors. Although the effects of humidors will differ day-to-day, there have been speculations and research suggesting that humidors can make baseballs easier for pitchers to grip while also making it more difficult for a hard hit ball to travel as far in humid weather.

2) Roster Expansion
The MLB rosters were expanded from 26 to 28 players this season. This change has helped most teams improve their pitching depth. Due to extra pitchers on the rosters, teams are less likely to go into a game with a worn-out and overworked bullpen. Managers also have more options when matching up against opposing hitters and less pressure to feel the need to stick with a starting pitcher who’s struggling.

4) Oddsmakers And The Habits of Bettors
Most fans enjoy offense, which means that betting on OVERS will be more fun to the average bettor than betting on the UNDERS. Although the humidors, roster expansion, and reduced Spring Training are all likely factors to the decrease in the offense- before the season started, it wasn’t as clear how significant those effects would be. Even still, it was in the best interest of the oddsmakers earlier to set the totals a little high, knowing that most bettors like to take the overs.

The Houston Astros will host the Los Angeles in the finale of a three-game series on Wednesday. The Astros won the series opener 8-3 on Monday. The second game of the series was not complete at the time of this preview.

The Los Angeles Angels have not finished with a winning record since 2015, and have not reached the playoffs since 2014. The Angels entered this season expected to break that trend, with a projected over/under win total set at 84.5, and with three-time MVP Mike Trout, and reigning MVP Shohei Ohtani currently both healthy another losing season would be unacceptable for this franchise.

After Monday’s home-opening win, the Astros have a half-game lead over the Athletics and Angels. Through the first 10 games, Houston has averaged 3.9 runs per game and allowed 3.5 runs per game. The Astros are fourth in MLB with 13 home runs, with nine different players who have gone deep this season.

The Angels may be an attractive team to back with Ohtani on the mound, but Houston has not been kind to Ohtani as a pitcher. In four career starts at Minute Maid Park Ohtani is 0-2 with a 6.50 ERA and 1.61 WHIP. The Angels bullpen has also struggled with a 4.88 ERA this season, which is the fifth-worst in MLB. Ordozzi has not been great this season either, but the Astros bullpen has been much better with a 3.11 team ERA. Houston has also controlled this rivalry recently with eight wins in the last 10 head-to-head meetings against Los Angeles.

Reserve your FREE copy of our Ultimate MLB Betting Guide jam packed with over 100 pages of insightful strategies and predictions to help you win the ’22 Season!

Both of these lineups are lethal. The Angels are second in MLB hammering 1.47 home runs per game, and Houston is fourth with 1.21 home runs per game. Given the past track records and recent struggles of both starters, expect the Astros bats to jump on Ohtani early and for the Angels to also have success off of Odorizzi. In this rivalry, 14 of the last 19 head-to-head meetings at Minute Maid Park have gone over the total, and I expect to see a high-scoring game Wednesday.