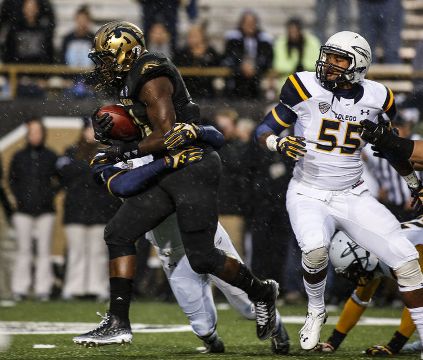 This match-up features two of three the youngest head coaches in the FBS, P.J. Fleck, of Western Michigan, 34 and Matt Campbell of Toledo, 35. The future is bright for Campbell and Fleck, currently both are being rumored as a candidate for some soon to be open power five conference head coaching jobs. Ironically both coaches also share the same birth day of November 29th, one will have a happier birthday than the other.

Toledo has a lot at stake in this game, and I’d assume most fans of mid-majors outside of Kalamazoo or DeKalb, are probably pulling for the Rockets.  A Toledo victory would keep hopes of a New Years Day bowl alive, as the Rockets are currently ranked 24th in the College Football Playoff rankings. A Toledo win also means a rematch in the MAC Championship game and second chance for arch rival Bowling Green, who the Rockets defeated 44-28 on November 17. A Toledo loss would send the Northern Illinois Huskies to their sixth consecutive MAC Championship game. 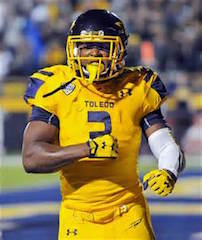 Western Michigan is very capable of ruining what has been a great season thus far for Toledo and Matt Campbell.  Two weeks ago the Broncos were rolling at 5-0 in the MAC before back-to back losses to Bowling Green and Northern Illinois. At 6-5, the Broncos will be looking to get the losing taste out of their mouths and improve their bowl position. Western Michigan also lost to Ohio State and Michigan State earlier this season. In this series, the Broncos have dropped five straight contest to the Rockets including 20-19 in overtime last season.

Both teams, run the ball well, but Toledo does a much better job of stopping the run.  The Rockets rank 13th in the nation is rushing yards allowed a game, while the Broncos rank 96th.  Not being able to stop the run played a big role in Western Michigan’s loses to both Northern Illinois and Bowling Green.  Toledo’s rushing attack is ranked number one in the Mid-American Conference. In what could be a chilly and wet Friday afternoon at the Glass Bowl, I see Toledo wearing Western Michigan down late in the second half, with standout running back Kareem Hunt leading the way.

Do not count Western Michigan out by any stretch of the imagination, but as long as Toledo protects the football, I think a rematch with Bowling Green is on the horizon.

The spread is Toledo -8, I think the Rockets cover, but as for me personally I am not going in at those odds. I’m going with Toledo at the Money line or in an adjusted spread. I like the Rockets, but I like them better at -6.5.