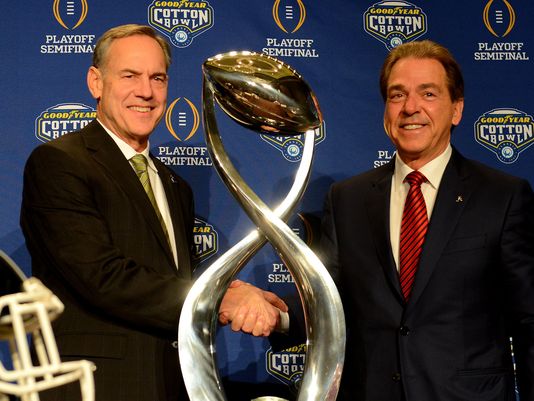 For the second consecutive season the Alabama Crimson Tide will enter the College Football Playoff as a heavy favorite against the Big Ten Champion. This time Alabama is hoping for a better result.

From the eye test, almost everything in this match favors Alabama. With a victory over Michigan State, Alabama would play for their fourth national championship since 2009, under coach Nick Saban. The Crimson Tide have been here before, and last seasons upset lost to Ohio State should provide extra motivation, if playing in the Cotton Bowl is not already enough. 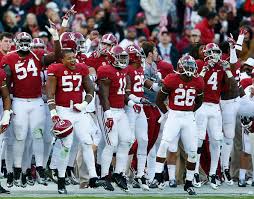 The Michigan State program, led by Mark Dantonio continues to prove its doubters wrong, and advance to another level each season. Michigan State has won its last four bowl games, including a 42-41 victory over Baylor in last seasons Cotton Bowl. The Spartans last bowl game defeat came in 2011, 49-7 to Alabama. 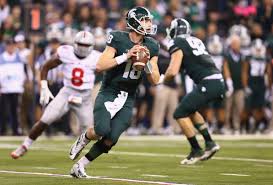 I believe that if Connor Cook, is truly deserving to be a top 15 pick in the NFL draft, this game is where he needs to showcase his talent.  Michigan State’s style of smash mouth football seems to play right into Alabama’s strength…..our does Alabama’s style play into Michigan State’s strength? It’s hard to measure intangibles, but Sparty seems to find away to win, even in the luckiest situations. https://www.youtube.com/watch?v=RBlgN85wB6U

Michigan State once again comes in as an underdog. I try to take personal feeling out of picks, but I will admit, I would love to see Michigan State win this game. However, in the end Alabama just has too much talent. I don’t think Michigan State will be able to put up enough points to beat Alabama. Connor Cook, is a  good pro-style quarterback, but his lack of mobility will be a problem in this game for the Spartans. Expect Derrick Henry to get over 30 carries in this game, and Alabama will get the job done. But  I do think that Sparty’s defense keeps this game from being a blowout and covers. Michigan State +10

Even coming in as the number one ranked college football team in the world, the Clemson Tigers still come into the Orange Bowl as an underdog.

The Oklahoma Sooners have been on fire since suffering a 24-17 loss to arch rival Texas, and have shown little flaws since.  Quarterback Baker Mayfield, leads the way with a 35:5 touchdown to interception ratio, and running back Samaje Perine comes in with just under 1,300 yards rushing.

On Dec. 30, three Clemson players were suspended; Deon Cain (34 rec 582 yards) being the impact player involved. The Tigers, however still come in with plenty of firepower. 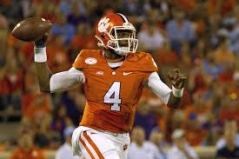 While this season, will tell its own story, Clemson  has had recent bowl game success as an underdog against more prestigious programs. Clemson has won its last three Bowl Games, which includes a 25-24 win over LSU in 2012, 40-35 over Ohio State in 2013, and  40-6 over the Oklahoma Sooners in last seasons Russell Athletic Bowl.

The Sooners have played as complete as any team in the country since the defeat to Texas, but good fortune has also been on Oklahoma’s side while running through the Big 12. Oklahoma defeated their three best conference opponents while their starting quarterbacks were out due to injury.  Oklahoma defeated TCU, 30-29 without, Trevone Boykin,   Baylor 44-34 without Seth Russel and Oklahoma State 58-23, with a banged up Mason Rudolph who only played one possession for the Cowboys . But give credit where credit is due, Oklahoma took care of business, and still bet very good teams. 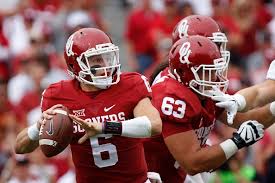 The betting public is currently 50/50. This is a risky play, but as gambler I will be playing the College Football Playoff. I am taking Clemson +4, and also predicting we see a “dab” from coach Dabo after the game. 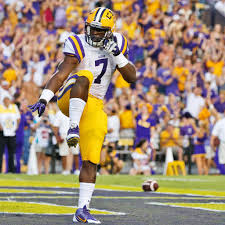 California, ranks fifth in the nation in passing offense, but only 104th in rushing yards allowed, which on paper does not bode well for the California Golden Bears on paper. For what it is worth, California did handle Mountain West conference champion San Diego State 35-7 early in the season. San Diego State defeated Air Force in the Mountain West Conference Championship 27-24.  Both defenses will struggle but I like Air Force -7.

The Navy Midshipman have an opportunity to win 11 games for the first time in the programs history which dates back to 1879.

Head coach, Ken Niumatalolo passed up an opportunity to coach two of his sons at BYU and continue his successful career at Navy.

Pittsburgh has seen the option attack once this season, in a 31-28 victory over Georgia Tech. Despite allowing 376 rushing yards to Georgia Tech the experience should help the Panthers in this game.

Head coach Pat Narduzzi has the Pitt program headed in the right direction and win have the Panthers ready to play. However, I think the Navy will be able to manage enough offense to win this game. I think this game will be too close to bet on, possibly a push. I see NAVY -3 covering, but barely. 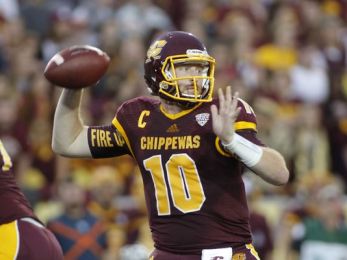 Minnesota will look to make it 3-0 for teams entering bowl games with a 5-7 record.  Minnesota has struggled this year against the run ranking only 69th in the nation defending it. The damage that has been done against Minnesota however, has come against much more potent rushing attacks then the Chippewas. Central Michigan ranks only 124th in rushing offense.

Central Michigan Cooper Rush, will challenge the Gophers through the air in a big way, Rush has thrown for over 300 yards 8 times this season and the Chippewas rank 15th in the nation is passing.  Minnesota ranks 14th in passing yards allowed.

Many will point to the Golden Gophers playing against Big Ten competition while the Chippewas play in the Mid-American conference as a reason that the statistic and records still favor Minnesota. Central Michigan however, has face Oklahoma State and Michigan State, and overall was 2-4 against bowl teams this season.

Minnesota is 2-0 against the Mid-American Conference this season, including two three point wins over Kent State and Ohio early in the season.  All seven Golden Gophers losses this season have come to bowl team.

The GoDaddy Bowl should provide penalty of offensive firepower. The Georgia Southern Eagles lead the nation with 355 rushing yards per game, while the Bowling Green Falcons are third in the nation in passing yards per game and fifth in scoring offense.

Both teams will be led by interim head coaches.  Dino Barbers, who led the Falcons this season was hired by Syracuse after the Falcons MAC Championship victory.  Georgia Southern head coach  Willie Fritz, accepted the same position at Tulane.

Bowling Green has had its struggles against some of the better rushing attacks the Falcons faced this season, and the Georgia Southern option offense will definitely put the Falcons to the test.  Bowling Green however will challenge the Eagles in the air, with the nations leading passer, Matt Johnson, and on the ground. Travis Greene set the Bowling Green school record for most rushing yards in a career.  Georgia Southern does not pose much of a threat through the air-the Eagles only average 61 yards passing per game.

The key for Georgia Southern will be to consistently run the ball well and control time of possession. The best way to defend the Bowling Green offense, could be keeping them off the field as much as possible; but with BGSU’s hurry up offense,  it usually doesn’t take much time for the Falcons to score. If Georgia Southern falls behind, keeping up with the Falcons could be a problem.

It’ll be interesting to see how this game plays out with the contrasting offensive styles. It’s hard to predict how Bowling Green will be able to defend the Eagles option attack.

I expect a strong effort from Georgia Southern playing in the schools first bowl game. Rival Georgia State exploited the Georgia Southern defense handing them a 34-7 defeat to end the regular season. Georgia Southern will definitely want to get the bitter taste from that loss out of their mouths, but in the end I think Matt Johnson and the Bowling Green offense will be too much.

Tuesdays MACtion kicks off Tuesday when the Akron Zips face the Utah State Aggies in the Idaho Potato Bowl.

Both Utah State and Akron rank in the top 25 nationally in total defense. But only in the top 100 for total offense (Akron 97th, Utah State 91st).

This is a very exciting time for the Akron Zips, who will be appearing in their first bowl game since 2005. The Zips have never won a bowl game-ever.  Each win this season for the  7-5 Zips has come against a team with a losing record. 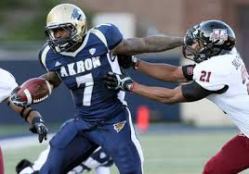 Utah State 6-6 has been here before. The Aggies will be playing in a bowl game for the 5th season in a row, they have won their last three consecutive bowl games.

It would be great to see Akron make history and win the programs first ever bowl game, but I have my money on Utah State -6.

The Boca Raton Bowl features one of the premiere non-power five conference match-ups. The Toledo Rockets and Temple Owls play very similar styles, both teams have strong run defense. Temple comes in with the nations 18th ranked defense overall and 21st against the run.  Toledo’s defense comes in as the nations 10th best defense against the run but only 106th in yards allowed against the pass.

Toledo overall, has had the more explosive offense this season, but the Rockets will also be without their former head coach Matt Campbell who left for Iowa State.

This should be a very good game as well.  The spread has started to go up to as much as Temple -3 in some places, but I’m locked in at Temple -1

Expect plenty of fireworks when the Arkansas State Red Wolves and Louisiana Tech Bulldogs square up in the New Orleans Bowl.

Arkansas State comes into the game red hot on an eight-game winning streak, the Red Wolves have scored at least 37 points in each of those victories.  The quality of Arkansas State wins, while impressive has all been against fellow Sun Belt conference opponents. Arkansas State opened the season 1-3 with loses to USC, Missouri and Toledo.

LA Tech, had a four game win streak and chance to play for the C-USA Championship snapped in the regular season finale 58-24 defeat to Southern Mississippi.

Expect a shootout, both teams are lead by high powered offenses.  The Red Wolves however, do lead the nation with 26 passes intercepted despite only ranking 92nd in passing yards allow.  LA Tech quarterback Jeff Driskel does put the ball in the air over 34 times a game, his ability to protect the ball and make good decisions will be crucial for the Bulldogs to win.

Overall this should be a very entertaining game that I can see going either way. Smart money here is on the OVER 68.

Get Sports Strong
Blog at WordPress.com.