A spot in the college football playoff will be on the line for both Michigan State and Iowa when these two teams collide in Indianapolis Saturday.

On paper the Big Ten Championship game is probably the most evenly balanced match-up of the weekend.  In scoring offense, defense, along with total offense and defense, there isn’t much separating the Spartans and Hawkeyes if you only focus on the numbers. Both Michigan State and Iowa control the ball well and capitalize on their opponents mistakes.  Iowa and Michigan State are tied for first in the Big Ten Conference in turnover margin, and rank second and third respectively in time of possession. 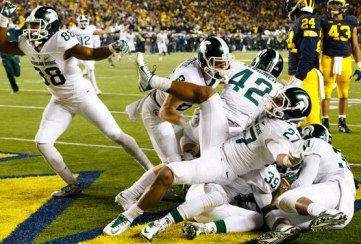 The Spartans have been able to find wins this season in the most hopeless place.

The Michigan State Spartans have won 5 out of their last 6 games against the spread while the Iowa Hawkeyes are 3-3 ATS during that same stretch.

The Spartans do come in as the more battle tested team this season, with wins over Oregon, Penn State and at rivals Michigan and Ohio State. Michigan State who comes in 11-1, however, has not been as impressive in several other games against lesser opponents.  Three point wins over Rutgers, Purdue and a loss at Nebraska, are a few examples of the Spartans playing down to their competition at times.

Much like the Spartans, the Hawkeyes have not consistently dominated some of their lesser opponents. Despite a lack of style points at times while facing the nations 62nd toughest schedule, the Hawkeyes come in at 12-0, and have done enough to win every game this season.  Arguably the Hawkeyes best win this season was a 40-10 throbbing of the Northwestern Wildcats on Oct. 17.  Michigan State will be the most talented team that Iowa has faced and present the toughest challenge thus far. 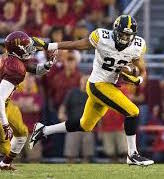 Iowa will be playing for its first outright Big 10 Championship since 1985. They have shared the title three times since.

I have not been the biggest supporter this season of Connor Cook, as a top first round NFL draft pick, but he definitely gives the Spartans the edge in this match-up.  Connor Cook and his entire team were firing on all cylinders when the Spartans rolled over Penn State last Saturday in a 55-16 victory. If the same Spartans that showed up against Ohio State and Penn State show up for this game then I see Sparty rolling.

It is worth noting that the underdogs are 4-0 so far in Big Ten Championship history, but I say the trend stops here. Michigan State -3 (buying 1/2 a point here from 3.5), wins and covers.