Despite having no impact on the national championship picture, the Fiesta Bowl should be the most watched and appealing bowl game.

I see this as a battle between which Ohio State team will show up, and a measuring stick for where the Notre Dame Fighting Irish program is. This is Notre Dame’s chance to show if they are truly ready to begin contending for national championships again.

Toledo, Ohio native Deshaun Kizer,  will led Notre Dame against his home state Buckeyes who never offered him a scholarship. Kizer has shown flashes of greatness this season, and has set up what is sure to be a quarterback controversy between himself and Malik Zaire this off season.

The Buckeyes seemed to sleepwalk their way through most of the season. In the regular season finale, the Buckeyes that fans were waiting to see finally showed up, in a 42-13 thrashing of Michigan. 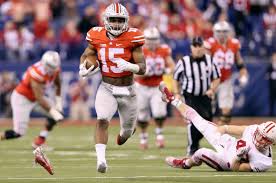 There is plenty of NFL talent on both sides, but in the end, I see Ezekiel Elliott and the Buckeyes -6.5 coming in motivated and being too much for the Irish in the end.