The Colorado Rockies continue their three game series Tuesday night as a +174 underdog against promising Dodgers rookie pitcher Juilo Urias.  Although Urias seems to have a promising career ahead of him with electric stuff, he is still only 19 years old.

The Rockies can hit, even away from Coors Field.  Colorado is third in the National League with 38 home runs on the road this season. They are also tied for second with 21 home runs against left handed pitchers.

Rockies starter, Eddie Butler is coming off of two poor starts against the Cincinnati Reds and San Francisco Giants. Overall he is 2-3 with a 5.65 ERA. He has not pitched more than six innings in any of his six starts this season. 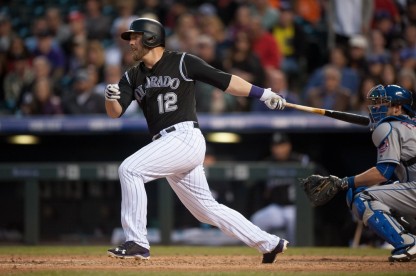 Julio Urias is unlikely to pitch more than five innings tonight, which means that both bullpens could have a decisive role in this game. If the result is decided by the bullpens, there is a strong advantage for the Dodgers, which is why they deserve to be favorites.

The key for the Rockies will be to get to Urias early and get a lead for Butler.  Eddie Butler will need to protect the lead and then hope that the Rockies bullpen can hold on.

The Los Angeles Dodgers need to provide Julio Urias with run support.  If Urias can get strikeouts and provide the Dodgers with at least four solid innings with some offense behind him, the Dodgers have the advantage.

Overall, I love this game to go over eight runs and feel very confident in this play. I do not see both starting pitches and bullpens pitching great tonight, so it is hard for me to see either team scoring anything less than three runs.

I love the eight run over most, but I also really like the value in the Rockies as a +174 money line underdog.  Even if the Rockies lose, if we get the over/under there is nothing lost.  I would stay away from the Dodgers as a -168 favorite. The better value is with Colorado.