Yesterday we got off to a 0-1 start in the MLB playoffs. We decided to take the Orioles in a match-up that I said could go either way. There was a lot to like about the Orioles, so I took the value and +142 that the Orioles were getting at the time. 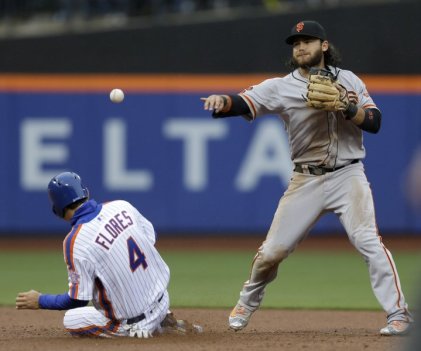 The MLB Wildcard round concludes Wednesday night with two teams that despite shaky seasons; always seem to find a way to win when needed.

The San Francisco Giants are World Series champs from the last three even-number years, 2010, 2012 and 2014.  The New York Mets are the defending National League champs from last season.

Bumgarner has made six career starts against the Mets, all time he is 5-0 with a 1.80 earned run average against them. On the road this season Bumgarner is 6-5 with a 3.39 ERA.

Noah Syndergaard is 1-2 with a 3.66 earned run average in three all-time starts against the Giants. At home this season Syndergaard is 6-6 with a 2.90 ERA. It is worth noting that Syndergaard has allowed 48 stolen bases in 57 attempts this season, that is a MLB worst since Hideo Nomo allowed 52 steals in 2001.

Overall, I am going with the Giants in this game. I would love to throw out a better reason as to why, but I am putting my trust into Madison Bumgarner, Bruce Bochy and the rest of San Francisco in this one. My main reason, the Giants have won the last 10 straight playoff series’ that they have played in. The Giants have a 34-14 post season record since 2010, which covers their last three playoff trips, all which ended with world championships.

There is definitely a lot to like about the Mets’ chances here, but I cannot bet against the Giants, not this early.  Giants Moneyline -105
Twitter @GetSportsstrong